Laughing through the Assumptions

On this dreary, wintery Sunday, I occupied a short chunk of an otherwise lazy morning taking the Wall Street Journal’s Quiz: What Kind of Expat Are You? If you’re an expat and reading this blog, I suggest you take it. I’d love to know what you think. I wonder if you, like Iggy and like me, find it laughable. There’s little room for nuance and it stiffly places today’s expats in one of three stereotypes, which I interpreted as:

1. The wayward twenty-something American teaching English abroad or some retiree living it up (and cheaply!) in an exotic, beachy locale.

3. The refugee who is fleeing from something, but from what I’m not sure. It could be a war-torn country (one questions asks “How did you arrive in your expat destination?” with one answer being “Shipping container”). Or, a little less tragically, a “messy divorce” back home.

Curiously, we fell into this last stereotype. Officially, we’re “transit tyros,” according to the folks at WSJ. In other words, expat novices. It’s true this is our first stint abroad together as adults. But I spent some time living and working in London and Iggy was an expat during his teens and is very well-traveled. We both didn’t like the distinctly negative connotation that accompanied our label. It suggested that we became expats because we were “fleeing something” and “where [we’ve] gone” is “better than what [we’ve] left behind.” I don’t know…I mean, we had a pretty good life back in Pittsburgh (a city we both love) complete with reliable and paid-off cars, a farmhouse full of character (as shown below), loving families nearby, and a steady income. 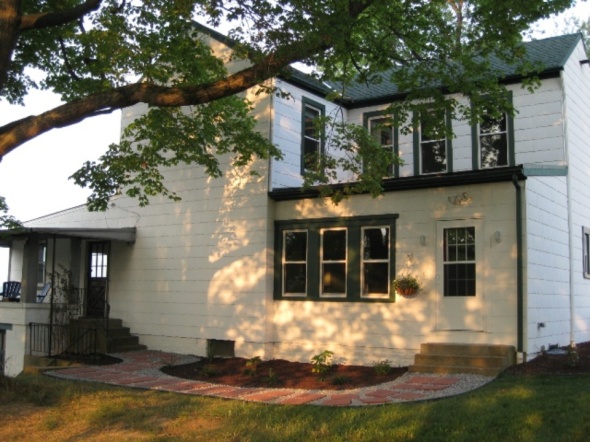 Sure, there are some things that are better about our life in China — a place we got married to come to. The money is good, we don’t have a lawn to mow or car insurance bills to pay, we get to travel to far-flung destinations every couple of months. Oh yeah, and Iggy’s got more job security here (shortly after arriving in China, we learned of layoffs in the corporate office back home…who knows what would have happened had Iggy stayed). But we’ve given up a lot, too. Like those families that are ever-growing. We have yet to meet two newly born nieces. And another big one: my career. By the time we return home, I’ll have been out of a full-time job for four years. I sometimes wake-up late at night, fearing for my professional and our financial future, worrying about the burden it places on Iggy to be our sole income provider, and wondering who will hire me with such a big gap on my resume. (Unfortunately, the quiz doesn’t cater to the supportive partners or spouses who are experiencing a very different type of expat life in comparison to their working counterparts.)

Officially, your answers to this 15-question quiz will put you into three “common categories” of expat: the transit tyro (see above), the global citizen, or the air miles maven. I think what’s missing is the “average Joe (or Josephine) expat.” You know, those non-designer wearing middle class folks who have their foot on a decent rung of the career ladder and who probably took a job abroad for a wide range of personal, professional, and financial reasons. The last question asks “How do you dress?” We didn’t fit any of the given descriptions: designer jeans, designer T-shirt, Converse; shemagh, shell suit, cross-trainers; vintage, sarong, sandals; chinos, Hawaiian Shirt, flip-flops; suit, handmade shoes / Louboutin heels, designer handbag. Come to think of it, no one we know in China or the U.S. does.

Hardly any of the questions deal with how we expats experience the country we’re living in. There is no attempt to understand how expats interact with locals or whether expats feel immersed (or excluded) in these cultures. The one exception is “How do you communicate with the locals?” You can answer by choosing one of the following: pillow talk, management speak, the international language of finance, I’m learning the local lingo, or these days everyone speaks English. In our case, it was a toss-up between the latter two. We both have learned some of the local lingo that helps us in our personal lives (how else would we be able to tell taxi drivers where we want to go?), but we’re thankful we have several English-speaking Chinese friends who can help us when we need them. And while most of Iggy’s Chinese colleagues at work speak English on paper, translators are most definitely required.

The WSJ encourages you take to their “fun” quiz. Here I am telling you to take it, too. But, to me, the only fun part about the quiz is laughing at all the narrow, hidden assumptions behind the silly questions from which I gather the WSJ understands nothing about what it’s like to be an expat. Call me crazy, but I’d prefer a quiz that’s a little more meaningful and that sheds real light on the kind of expats out there who, like us, are fluttering around the globe living between two worlds — those of our life back home and our life abroad.

25 Jan This entry was published on January 25, 2015 at 5:11 pm. It’s filed under Expat Life and tagged expat life, expats, Wall Street Journal. Bookmark the permalink. Follow any comments here with the RSS feed for this post.

7 thoughts on “Laughing through the Assumptions”