I remember gorging on RJ’s raspberry and strawberry flavored licorice while listening to Neko Case, Alabama Shakes, and a la-la-lotta Neil Young during the final driving days of our New Zealand trip back in 2014. We had already putted around the North Island and biked and boated in Marlborough. By our last week, we were used to the slow-going roads and the pros (a hotel room/car in one) and cons (frigid campground showers) of the RV lifestyle.

We weren’t used to or ready for the sandflies, but we didn’t let them ruin our two nights in the remote Totaranui DOC Campground. It was one of the more memorable places we stayed, and it served as a lush, peaceful base for accessing the Abel Tasman Coast Track. We spent the better part of a day tramping through storybook-like jungles and over pristine, deserted beaches with cool names like Mutton Bay. That’s where we ate lunch on a jagged outcrop as a seal and her pup swam in the clear water below. The beauty of the day will have to live on mostly in my mind because we only have grainy and underwhelming cellphone photos like this view from Separation Point. 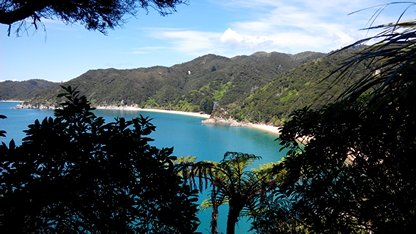 Same with the early morning tramp we took to Wainui Falls the next day. It’s a few miles away from Totaranui and supposedly popular but we didn’t pass a single hiker. 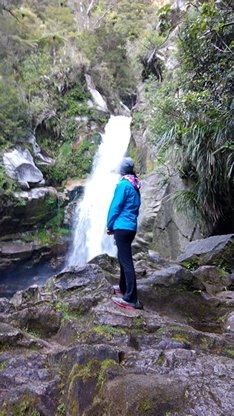 We had solitary outings farther west on the gusty beaches of Wharariki and Farewell Spit. In fact, we nearly got blown over at Wharariki and preferred walking along the thin pebble path that took us over verdant hills full of grazing sheep and cows to get there and back. 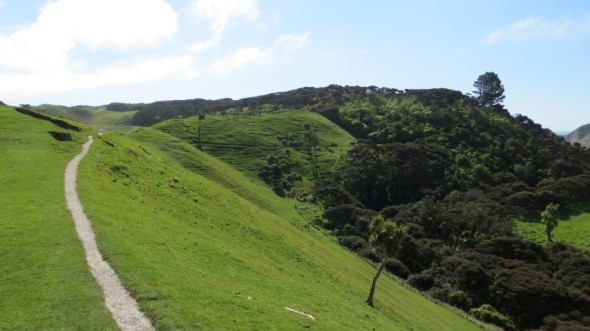 It was a familiar scene and similar to the open, sheep-filled grassland we walked across — and could’ve jumped off — at Cape Farewell. I stayed put behind the fence to enjoy the view to my left… 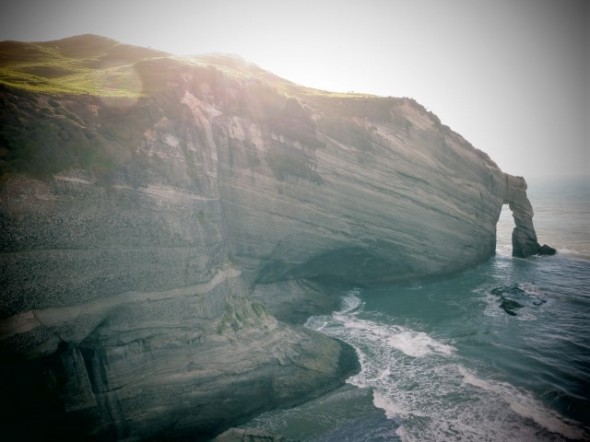 …and tried not to look right where Iggy chased around these harmless creatures, all of whom were too dangerously close to the edge for my queasy stomach. 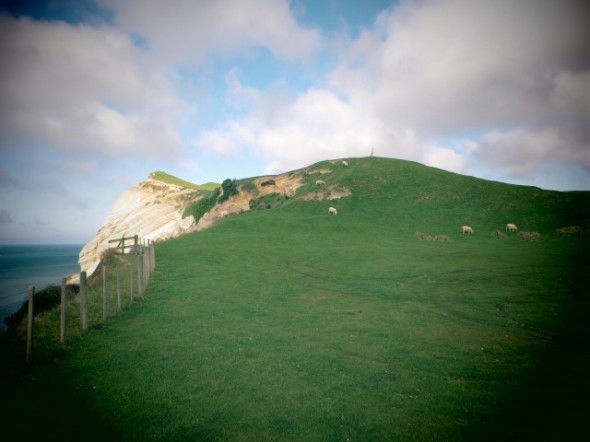 We left the beautiful coastline and headed inland where we had our worst encounter with the sandflies. After a long drive, we stretched our legs on the short Kawatiri Historic Railway Walk while furiously swatting them away. 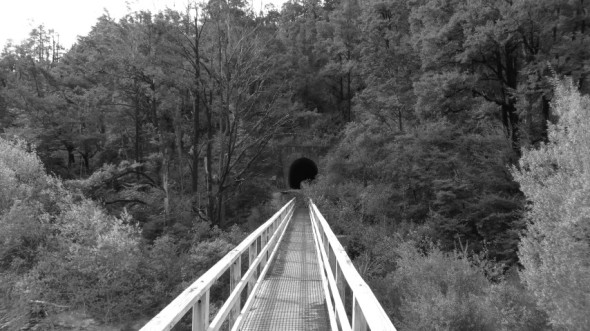 But at Kerr Bay we couldn’t leave the RV at sunset or sunrise when they were at their swarming worst. We would’ve stayed longer in the Nelson Lakes region had it not been for the determined little sh*ts. 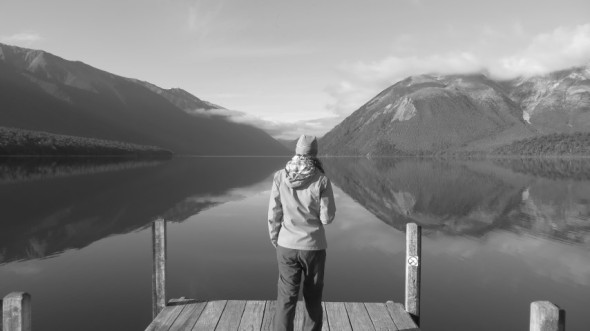 On our way southeast towards Christchurch, Iggy made some big enemies at Oahu Point but nice little friends at Oahu Falls. 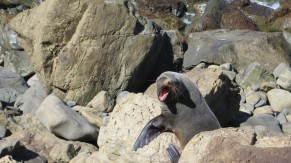 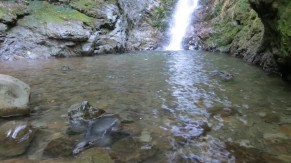 We spent a night just down the road in Kaikoura where we ate lobster at the Green Dolphin as we stared across the road towards the South Pacific Ocean. Most people stop for a chance to do some whale watching. We were too cheap to pay for the boat trip and so opted for a long cliffside walk. Once again, we had the path to ourselves, which made the jaw-dropping views of the coastline and, when we turned around, the snowy peaks of the Seaward Kaikoura Mountains that much more enjoyable. 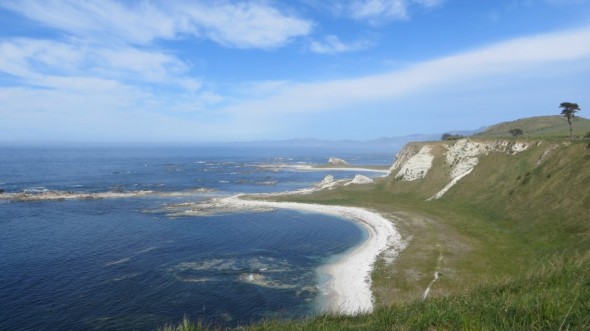 We followed the coast down to Christchurch and then farther south  to the French-leaning town of Akaroa, which I told you about, oh, two years ago, so I won’t go into detail here, though looking back I remembered we wished we had stayed there longer. We thought we needed more time in Christchurch but given its tiny size and somewhat scary RV parks, we didn’t. Two days gave us more time than we needed to wander around its Central Business District, which still wasn’t fully recovered from the 2011 earthquake. The ChristChurch Cathedral was particularly hard hit and though work on it was well underway, I couldn’t help but wonder what the dozens of pigeons would do once they got kicked out. 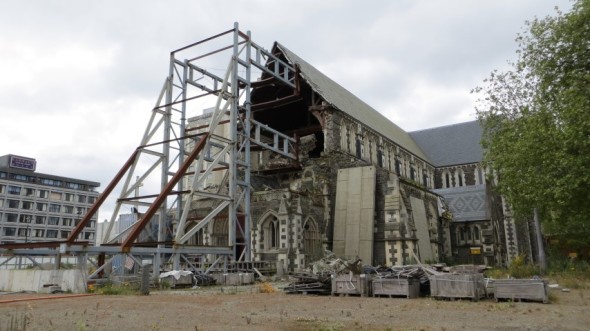 We did some shopping at the re:START shipping container mall and ate at the food trucks around it, but most of our day was spent learning about Maori history at the Canterbury Museum and enjoying our last hours of clean and fresh New Zealand air at the sprawling Botanic Gardens. It was bittersweet on our final day. We said goodbye to our beloved green beast and did the two things that were within walking distance from our airport hotel: visit McDonald’s twice and in between the International Antarctic Centre. 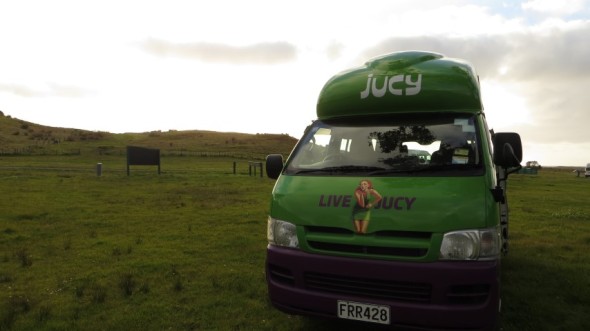 We did a lot of “once in a lifetime” trips from our temporary home base of Haiyang, but I think this one may have been both of our favorites. Not shocking considering all the posts I’ve done on it. It’s crazy to think we were packing up and getting ready to leave for New Zealand this time two years ago. Now here I am doing the same. But this time the destination is our final one. In two weeks, I’ll be returning home to the U.S., along with our most prized souvenir from our four years in China — Baby K. Which means I should probably go now and get packing. For us both.

Older: In the Spirit of Wordless Wednesday
Newer: Expat Exodus